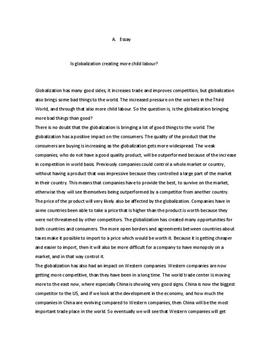 The globalization has a positive impact on the consumers. The quality of the product that the consumers are buying is increasing as the globalization gets more widespread. The weak companies, who do not have a good quality product, will be outperformed because of the increase in competition in world basis.

Previously companies could control a whole market or country, without having a product that was impressive because they controlled a large part of the market in their country. This means that companies have to provide the best, to survive on the market, otherwise they will see themselves being outperformed by a competitor... Kaufen Sie jetzt Zugang, um mehr zu lesen Schon registriert als Abonnent? Bitte einloggen