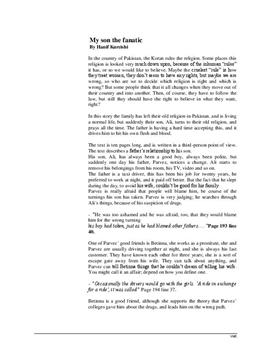 Analyse: Analysis of "My Son the Fanatic"

In the country of Pakistan, the Koran rules the religion. Some places this religion is looked very much down upon, because of the inhuman “rules” it has, or so we would like to believe. Maybe the cruelest “rule” is how they treat women, they don’t seem to have any rights, but maybe we are wrong, so who are we to decide which religion is right and which is wrong? But some people think that it all changes when they move out of their country and into another. Then, of course, they have to follow the law, but still they should have the right to believe in what they want, right?

In this story the family has left their old religion in Pakistan, and is living a normal life, but suddenly their son, Ali, turns to their old religion, and prays all the time. The father is having a hard time accepting this, and it drives him to hit his own flesh and blood.