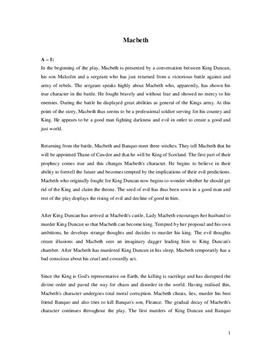 In the beginning of the play, Macbeth is presented by a conversation between King Duncan, his son Malcolm and a sergeant who has just returned from a victorious battle against and army of rebels. The sergeant speaks highly about Macbeth who, apparently, has shown his true character in the battle. He fought bravely and without fear and showed no mercy to his enemies. During the battle he displayed great abilities as general of the Kings army... Kaufen Sie jetzt Zugang, um mehr zu lesen Schon registriert als Abonnent? Bitte einloggen