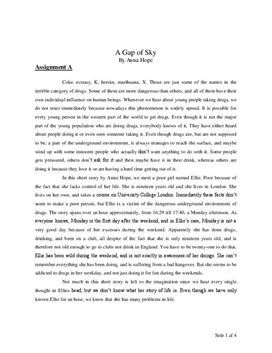 A Gap of Sky

Aufsatz über Anna Hopes "A Gap of Sky". ("Focus on narrative technique and the importance of the city")

In this short story by Anna Hope, we meet a poor girl named Ellie. Poor because of the fact that she lacks control of her life. She is nineteen years old and she lives in London. She lives on her own, and takes a course on University College London. Immediately these facts don’t seem to make a poor person, but Ellie is a victim of the dangerous underground environment of drugs.

The story spans over an hour approximately, from 16:29 till 17:40, a Monday afternoon. As everyone knows, Monday is the first day after the weekend, and in Ellie’s case, Monday is not a very good day because of her excesses during the weekend. Apparently she has done drugs, drinking, and been on a club, all despite of the fact that she is only nineteen years old, and is therefore not old enough to go to clubs nor drink in England. You have to be twenty-one to do that. Ellie has been wild during the weekend, and is not exactly in awareness of her doings. She can’t remember everything she has been doing, and is suffering from a bad hangover. But she seems to be addicted to drugs in her weekday, and not just doing it for fun during the weekends... Kaufen Sie jetzt Zugang, um mehr zu lesen Schon registriert als Abonnent? Bitte einloggen